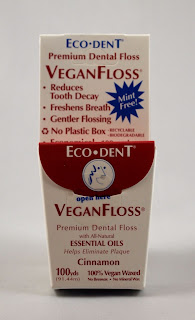 What makes a floss vegan? What is a good vegan floss? I've seen these questions asked time and again across the web, so I set out to find some answers. It turns out that floss is usually vegan but the wax and/or enzymes used are not. Eco-Dent makes two varieties of floss that come in  innovative cardboard packages. Although both are vegan waxed, strict vegans will want to look for the VeganFloss, as it contains no dairy-derived enzymes.

Pros:
Cons:
Summary:
If you're looking for a vegan floss, Eco-Dent's VeganFloss is a nice option. The cinnamon flavor is also a fun alternative to the traditional mint. It has the most eco-friendly packaging I've ever seen for a floss. The cardboard box becomes the case for the floss. The only plastic included is a tiny bag around the floss to help keep it fresh.  I would love to see Eco-Dent adding a vegan woven floss to the line in the future and perhaps modify the GentleFloss packaging to make it more clear that it isn't entirely vegan.

Product Ratings (out of 5)

Giveaway:
The giveaway has ended.  Congratulations to Amanda!

UPDATE:
An Eco-Dent representative forwarded the following information: "The GentleFloss has undergone a change in the recent months, and it is now completely vegan as well; honey and milk derived enzymes have been removed. The stock in stores should be switched over soon, if it isn't completely already.  The best way for a customer to know which version of the GentleFloss is which is the red 'starburst' graphic on the tab part of the packaging; if it says 'Vegan Waxed,' it is the old version. The new product will instead say '100% Vegan!' on it."

Way to go, Eco-Dent!  I'm glad to hear that both flosses are now entirely vegan.

Did you enjoy this post? If so, why not sign up for our email list and get posts by email? Or if that's not your style, stay in the loop with an occasional newsletter instead.

This blog accepts forms of advertising, sponsorship, or other forms of compensation.
The compensation received may influence the advertising content, topics or posts made in this blog. That content, advertising space or post may not always be identified as paid or sponsored content.
The owner(s) of this blog may be compensated or given a product free to provide an opinion on products, services, websites and various other topics. Even though the owner(s) of this blog receives compensation or free products for our posts or advertisements, we always give our honest opinions, findings, beliefs, or experiences on those topics or products.
The views and opinions expressed on this blog are purely the bloggers' own. Any product claim, statistic, quote or other representation about a product or service should be verified with the manufacturer, provider or party in question.
This blog does not contain any content which might present a conflict of interest.
Amazon Associate Disclosure:
Kaylin's Kit is a participant in the Amazon Services LLC Associates Program, an affiliate advertising program designed to provide a means for sites to earn advertising fees by advertising and linking to amazon.com, endless.com, smallparts.com or myhabit.com.
For questions about this blog, please click here to contact me.