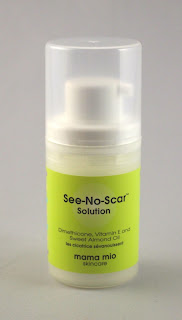 Scars can be seen as a mark of "character," but sometimes it's not the character we'd like to portray. Scar creams can help to reduce the appearance of scars but many have preservatives, harsh fragrances, or undesirable chemicals. However, there are some gentler remedies that can also be effective, such as Mama Mio's See-No-Scar Solution.

Pros:
Cons:
Summary:
Mama Mio's See-No-Scar visibly reduced my scars after twice daily use for at least 2-3 weeks.  I saw the greatest change on a light scar, but I'm sure I'd see more noticeable improvements in my other scars with continued use.  If I were to change this cream, I'd put it in a recycled and recyclable bottle and perhaps swap out a few ingredients to create an even gentler scar treatment.

Product Ratings (out of 5)

Did you enjoy this post? If so, why not sign up for our email list and get posts by email? Or if that's not your style, stay in the loop with an occasional newsletter instead.

This blog accepts forms of advertising, sponsorship, or other forms of compensation.
The compensation received may influence the advertising content, topics or posts made in this blog. That content, advertising space or post may not always be identified as paid or sponsored content.
The owner(s) of this blog may be compensated or given a product free to provide an opinion on products, services, websites and various other topics. Even though the owner(s) of this blog receives compensation or free products for our posts or advertisements, we always give our honest opinions, findings, beliefs, or experiences on those topics or products.
The views and opinions expressed on this blog are purely the bloggers' own. Any product claim, statistic, quote or other representation about a product or service should be verified with the manufacturer, provider or party in question.
This blog does not contain any content which might present a conflict of interest.
Amazon Associate Disclosure:
Kaylin's Kit is a participant in the Amazon Services LLC Associates Program, an affiliate advertising program designed to provide a means for sites to earn advertising fees by advertising and linking to amazon.com, endless.com, smallparts.com or myhabit.com.
For questions about this blog, please click here to contact me.